At home, we speak Arabish — our kind of English. It’s like my family’s secret code, so even an expert linguist would be entirely confused. We swiftly blend Arabic vocabulary with English suffixes and bounce between Arabic and English words. Our makeshift language is what we call home; it’s a big pot of soup made of an array of spices and ingredients that fills up any room with a warm aroma.

The moment I step out of the front door, I bury that instinct deep down. I drop Arabic from my set of vocabulary. I used to be determined to keep it hidden from the world. I wanted to fit in as an ordinary American who speaks normal English with her parents and eats a normal meal of macaroni and cheese every night. I would be embarrassed when my mom walked into Publix with me and started speaking Arabish, begging her to quiet down so that no one heard us.

That ‘normal English’ is how I speak in front of everyone who isn’t my family. It doesn’t have the same warm feeling, but it is ordinary — which is what I thought everyone else wanted us to be. Without my parents around me to remind me of home, I felt like a real American.

I remember a time when I was too young to differentiate between these two universes. I would accidentally slip an Arabic word at school when talking to my best friend about the latest Rainbow Loom pattern or a new American Girl Doll outfit, and she would make a bewildered face. I didn’t realize it was because I said something she didn’t understand. In my young mind, everyone spoke Arabish at home and ate kushari for dinner.

I can’t trace back to a specific event and call it the moment that shaped my perception of our country. Was it the first time I heard about 9/11? Was it when I was riding in the backseat in Texas, looking out the window, and seeing a man lean out of his car to stick his middle finger up at my mom and tell her to go back to where she came from? Was it on November 3rd, 2016? Was it seeing families being torn apart at our southern border? Was it learning about slavery and the twisted history of our nation? Was it watching Fox News in the background of a restaurant and hating myself for being an Arab and a Muslim? Or was it only recently when I witnessed protesters on the street shouting for equality and justice, only to find the police violently silencing them with teargas, pepper spray, and batons?

I don’t know. I don’t even know what a ‘normal’ American is anymore. But I’ve woken up. I stand by my culture, by my religion, and by my family. I’ve learned that the biggest challenge is to be myself in a country that is trying to make me like everyone else. I know who I am now. I am Egyptian, and I am American. I am a Muslim, but also a sister to Christians, Jews, and Hindus alike. I am Arab and white and black and Hispanic and Asian, all at once. I am a sum of my community, whose beauty lies in its diversity.

I remember driving down the I-285 with my dad not too long ago. We were having a lively discussion about politics and racial inequality. He said, “Republicans and Democrats are very different. So are whites and blacks, gays and straights, and Muslims and Jews. But instead of fixating on the differences, concentrate on the similarities. Because — believe me — you’ll find that the similarities outnumber the differences a thousand to one”.

And I remember reading Horton Hears A Who by Dr. Suess to my little brother, reminiscing on the times when I was just as young as him, having my mom read that same book to me. I read two lines, which I always come back to and perceive in a new way. They read, “a person’s a person, no matter how small”. Even if you’re a 16-year-old girl in Atlanta who loves her mom and dad and speaks Arabish, you’re still a person – no matter how small.

View Comments (2)
About the Contributor 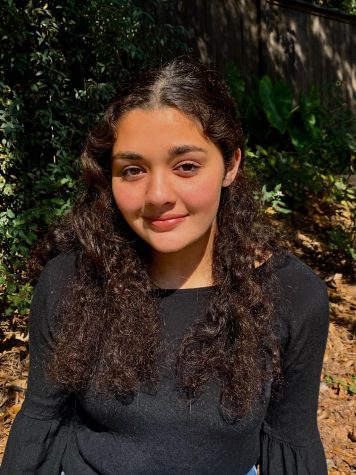