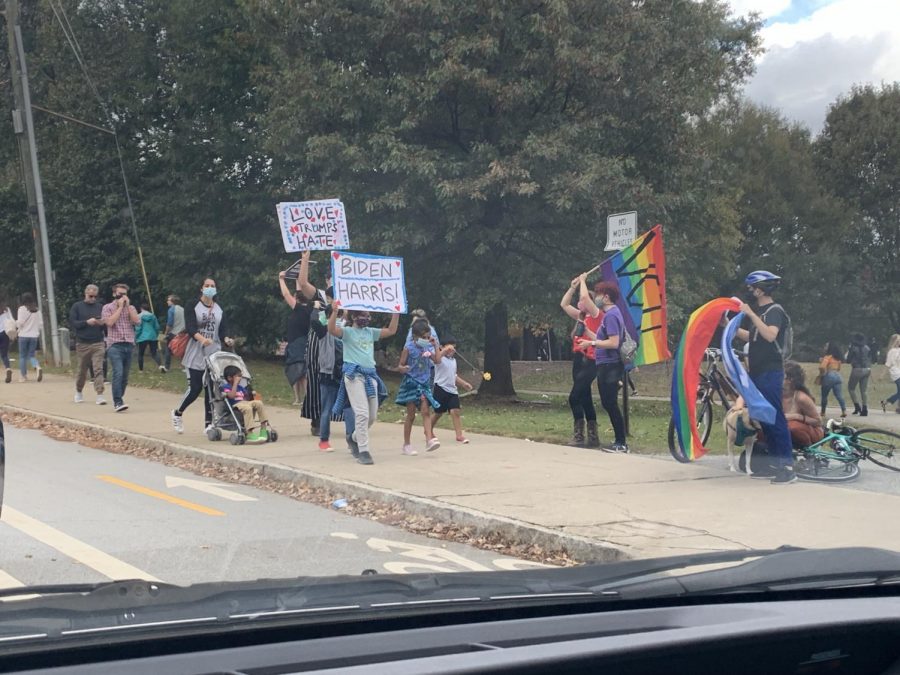 On Saturday, Biden supporters took to the streets, celebrating his win across Atlanta

After days of counting votes, it was announced on Saturday, November 7th that Joe Biden has won the 2020 presidential race and is the president-elect of the United States of America.

Currently holding 290 electoral votes and flipping 4, possibly 5, states from the 2016 election, Biden won with 50.6% of the popular vote against his opponent, the incumbent president Donald Trump, who trailed by 3%.

As of Tuesday, there is a tie in the Senate election with both the Republican and Democratic parties holding 48 seats. Alaska and North Carolina are still reporting votes and are leaning towards their Republican candidates. Both races in Georgia will have a run-off election in January as no candidate received 50% of the votes. Jon Ossoff (Dem.) will run against David Perdue (Rep.) while Raphael Warnock (Dem.) will run against Kelly Loeffler (Rep.). This provides a chance for Democrats to have the majority vote in the senate since the Vice President has the authority to cast a tie-breaking vote.

The Democratic Party has gained control of the House once again, currently holding 218 seats, the amount required to have the majority vote.

Across the nation, many candidates from groups that are underrepresented in the United States government won seats at all levels. New Mexico was the first state in US history to elect all women of color to the US House of Representatives. Sarah McBride, a Democrat from Delaware, is the first transgender state senator. Mondaire Jones and Ritchie Torres, Democrats from New York, became the first gay Black members of Congress with Ritchie Torres also becoming the first gay Afro-Latino person to be elected to Congress. Mauree Turner, the first Black person elected to represent Oklahoma’s 88th district also became the state’s first Muslim legislator and America’s first nonbinary state legislator. Missouri elected the state’s first Black woman, Cori Bush, to the state House, while New York elected two Indian-American Democrats, Zohran Mamdani and Jenifer Rajkumar, to the state House of Representatives. Both Mamdani and Rajkumar are the first South Asian representatives in New York’s state legislature.

Biden’s Vice President, Kamala Harris, is also making history, becoming the first woman, the first Black woman, and the first woman of Indian heritage to ever hold the role of Vice President in American history. Kamala Harris said on Saturday in her acceptance speech, speaking of her mother Shyamala Gopalan Harris, “When she came here from India at the age of 19, maybe she didn’t quite imagine this moment. But she believed so deeply in an America where a moment like this is possible.” Harris’ election to the second highest office in our nation is a significant milestone for our country.

Her husband, Doug Emhoff, makes history as the first Second Gentleman while Biden’s wife, Dr. Jill Biden, will become the first First Lady to ever hold a job for the duration of her time in the White House.

In major cities like Washington D.C., New York City, Atlanta, London, and Paris as well as smaller towns and cities across the US, celebrations erupted on Saturday with the news of Joe Biden’s win. Car horns blared, people cheered in the streets, and the church bells of Notre Dame were rung to mark the blue shift in American politics.

Regardless of an individual’s political affiliation, the 2020 election indicates a change in the course of current issues such as the COVID-19 pandemic. As America faces a third wave in covid cases, Joe has already begun to form specific plans to control the spread of the virus and reduce infection rates. And, he is going into office with outlined Biden-Sanders Unity Task Force Recommendations drafted by Democratic Task Forces to ensure more progressive changes under the Biden administration. In his victory speech, he promised the American people that he will work towards “a nation united. A nation strengthened. A nation healed.”

Lucy Shuker, the VP of the AGS Young Democrats who is sporting blue hair in honor of Blorgia, said in an interview, “I am so thrilled with the outcome of the election. It gives me hope for the future of America”. Additionally, she made a point to remind the AGS community that “Georgia is so, so important in the Senate race.” Our state is vital in determining the future of American politics, as are young people who are approaching the voting age.

With that in mind, if you are interested in getting involved in the upcoming election, don’t hesitate to reach out to the leaders of the Young Democrats, Lucy and me, for more resources and information!