The 39 Steps Takes the Stage 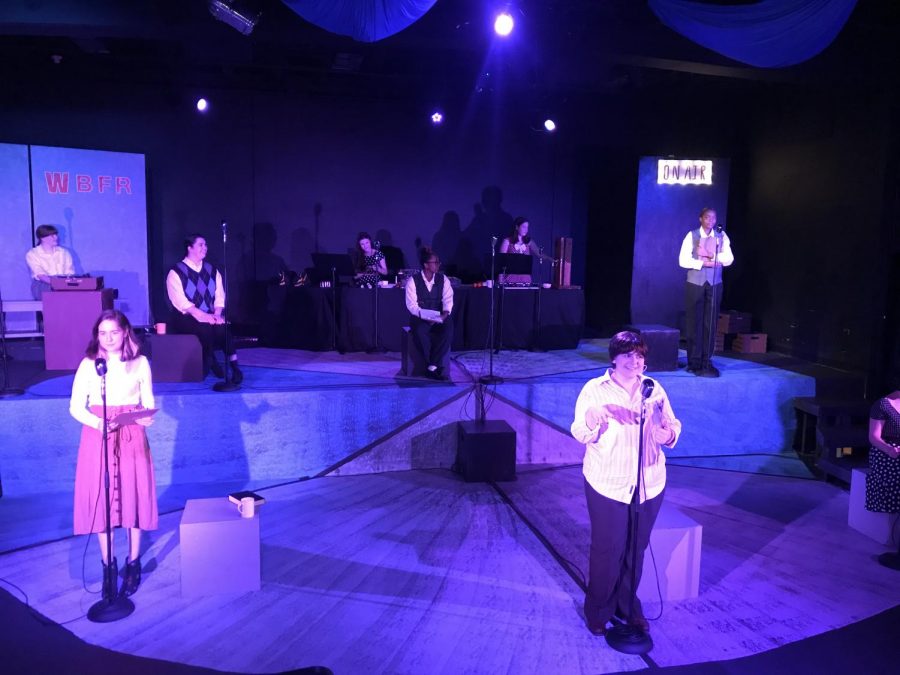 This Fall at AGS, eighteen girls, including seven crew members put on a production of 39 Steps: A Live Radio Play inspired by Alfred Hitchcock’s classic film. The play follows a man named Richard Hannay, (played by Lucy Shuker ‘21) who is visiting London in the 1930s. He meets the mysterious Annabella, (played by Dia Chiusano ‘22) who is on the run from foreign agents. Annabella is murdered, and it’s up to Hannay to uncover the truth about the 39 steps with the help of the feisty Pamela (played by Maggie Jones ‘21) he meets along the way. The cast went on to compete at the GISA State One Act Competition, where Monday Carter (‘21) received an honorable mention for her role as Man #1 and Dia Chiusano (‘22) won best performer for her role as Annabella.

The Fall Play this year was different from previous years due to the ongoing COVID-19 pandemic. It was a radio play, meaning it was presented through dialogue. Each actor had their own microphone they stood at, and recited their lines from there. This allowed for social distancing on stage. Other differences from previous years were that actors had to provide their own costume and props, and the show was live streamed instead of having an audience in the theatre. Claire Gregory (‘23) who watched the live stream said, “The radio show-style was a very clever way to adapt to the COVID-19 pandemic, and the livestream was the best way to do it. The show kept you on the edge of your seat, I liked how it wasn’t completely clear who was good and who was evil”. The show opened and closed on November 6th, after being delayed a week due to Tropical Storm Zeta.

The cast also enjoyed rehearsing and performing the show. Monday Carter (‘21) said, “Participating in the Fall Play was an amazing experience, with an even more amazing group of girls. It helped me form new friendships and learn so much about putting on a production with people I grew to love. My favorite part was definitely bonding with my other castmates backstage, and watching our chemistry offstage improve our acting onstage.”With the ongoing pandemic, the cast was really glad they still got to put on a play this year. Especially the seniors, since this was their last Fall Play. Lucy Shuker (‘21) said, “Even though the play was very different, it was still extremely rewarding. I’ve done it all throughout high school, so this has been very bittersweet and hard to come to terms with. I’m so proud of our entire cast and crew for being able to take our situation, and turn it into something that was still just as fun. I’m very thankful to Ms. U and Mr. S for working hard to make this possible, especially for the seniors.” The AGS community is so proud of this talented cast and crew for putting in the work to put on a production during a pandemic. A huge thank you goes out to director, Ms. Uterhardt along with Mr. Silvestri because this show wouldn’t have been possible without their dedication. If you’re interested in seeing another AGS production, the upper school will be putting on the award winning musical Urinetown this spring.