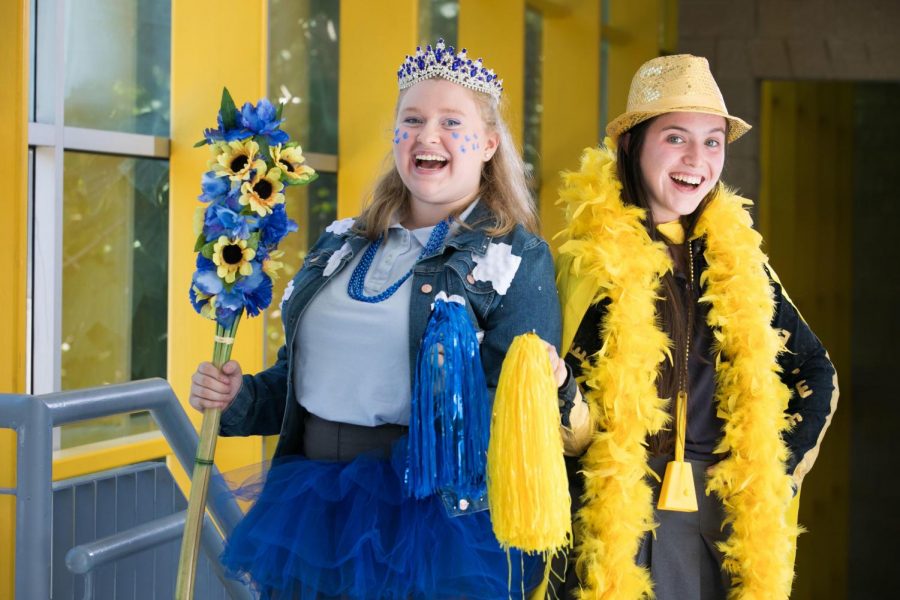 Getting to Know Your Goddesses

One of our most valued traditions at AGS is our yearly Earth and Sky competition. AGS students are placed on one of two teams, Earth or Sky. Both teams compete throughout the year in friendly competitions, and the winning team is announced on Horizon Day in April. At the end of every school year, two rising seniors are elected to serve as a leader for their team. They’re known as our Earth and Sky goddesses.

This year, our Earth and Sky Goddesses are Lala Tolbert (‘20) and Abby Philpott (‘20). Abby and Lala have made an effort to revamp the Earth and Sky program. They’ve made sure that this year we have more Earth and Sky lunches, they’ve created a goddess Instagram page, and they’re currently hosting a competition for students to redesign the Earth and Sky t-shirts. I recently got a chance to talk to them about how their jobs as goddesses are going so far. When asked why they decided to run for their positions, both of them said that they had wanted to be goddesses since they came to AGS.  Abby said, “It seems like such a cool title, being a goddess. But really it became more about leaving an impact and a legacy at this school. I’ve never really been a leader type person and I wanted to change the way I perceived myself and the way I was perceived by others here.” Lala wasn’t thrilled about coming to AGS her second semester of 6th grade, but she remembers what drew her. She recalls, “One of the main things that drew me to AGS was the whole Earth/Sky Program and Horizon day. I thought it was the coolest thing I’d ever seen at a school.” Both of them described the election process as a lot of work, yet super rewarding and a lot of fun. Lala came up with the idea for her now-iconic dance presentation in 9th grade after watching Napoleon Dynamite. In fact, she spent 5 hours a day in her yard to learn her dance. They both agreed that the whole experience pushed them to get to know other students, especially the girls in younger grades. They were both super excited when they found out they had won, and it was hard for them not to tell anyone since they found out a week before it was announced on the last day of school.

As for changes this year in the Earth/Sky program, Abby said, “The biggest change me and Lala really wanted to make was the way students feel about Earth and Sky. We want everyone to be super enthusiastic and proud of their team, the way students at this school are enthusiastic and proud of their school.” Lala added, “We wanted to show Earth/Sky more around the school so we designed the columns, which is the designated Earth and Sky area, and it does create more competition. We’re redesigning the Earth and Sky t-shirts which is great because the ones now are not the most attractive.” They hope that by eliminating the Big/Lil Sis program, students will have more lunches to get closer to their Earth and Sky families. They even have a 30 page Google doc called “Goddess Business” of ideas of what they can add to the Earth and Sky program that they hope to make into an Earth and Sky Goddess handbook. Abby and Lala have been a great team so far. “We’re just a fantastic pair. What I don’t bring to the table, she brings to the table,” says Abby. The only thing they disagree on is who will be winning on Horizon day. One Earth/Sky event you can look forward to is a schoolwide Kahoot that will happen in January.